A 17-year-old Disney star’s breakup song ‘Drivers License’ is about to break the goddamn internet.

If you’ve never heard of Olivia Rodrigo, then…well, same. Her main claim to fame is starring in Disney’s High School Musical: The Musical: The Series, so while she might be an unknown to anyone above the age of 20, she already has a whole bunch of young fans.

Rodrigo dropped her first single less than a week ago, and if you haven’t heard the song, then please do yourself a favour and listen right now.

It’s an absolute gut-punch of a track that will take you straight back to your first experience of heartbreak, with Rodrigo’s sound reminiscent of Lorde and a dash of Taylor Swift. While we’re only a few weeks into 2021, the song is set to be one of the biggest tracks of the year, claiming the number one spot on Apple, Amazon, and iTunes.

Aside from the song being straight-up stunning, fans have become low-key obsessed with who Rodrigo is singing about, as the lyrics paint the picture of a love triangle and include clues that point to two Disney stars: Joshua Bassett and Sabrina Carpenter.

So what the hell does it all mean? Thankfully, people on TikTok have done us a great service by decoding the whole song to piece the mystery together and here’s everything you need to know…

A cheat sheet to the Disney love triangle rumoured to have inspired Olivia Rodrigo’s ‘Drivers License’.

What is the song about?

‘Drivers License’ is about Rodrigo dating a boy who taught her how to drive, but by the time she got her driver’s licence, they were no longer together. This means that every time she drives, she is reminded of this person and how he broke her heart.

It’s just a painfully relatable story of lost love and it’s truly shattered us all.

The track includes lines like, “Guess you didn’t mean what you wrote in that song about me,” which has sent fans into a frenzy over the identity of the person the song is about. Internet sleuths are convinced she is talking about her HSMTHTS co-star Joshua Bassett — and they’ve got receipts.

Who is Joshua Bassett?

Bassett starred opposite Rodrigo in the Disney series, with the pair playing the updated versions of the original film’s Troy and Gabriella. While neither have confirmed they were ever dating, there’s no denying they had on-screen chemistry.

While filming the show, they both appeared on each other’s social media accounts throughout 2019. However, all of the pics they took together have since been deleted from their accounts which just screams bad breakup. Now, let’s get to the song. First up, Rodrigo actually said in an interview that Bassett had given her a driving lesson in an In-and-Out parking lot.

Secondly, Rodrigo mentions “you wrote in that song about me,” and this could be alluding to the love song they co-wrote together ‘Just for a Moment’, or alternatively Bassett released a love song in 2020 titled ‘Anyone Else’.

Then there’s the mention of a white car as Rodrigo sings, “Red lights, stop signs, I still see your face in the white cars,” which TikTok users are convinced is referencing Bassett’s white car, which appears on his YouTube channel.

The actor’s actions following the release of ‘Drivers License’ has done very little to dissuade fans from thinking the song is about him. The same day that Rodrigo announced the song, he dropped the name of his upcoming single called: ‘Lie Lie Lie.’ The song includes lyrics like, “I know what you say about me, I hope that it makes you happy, can’t seem to get me off your mind, oh I know you’re lyin’ through your teeth.” Wow, OK!

Although, it should be noted that this TikToker reckons he can prove the song is not about Rodrigo, as it was teased years ago — long before he even met his Disney co-star.

Interestingly, while several HSMTMTS stars commented on Rodrigo’s song announcement, only one praised Bassett’s upcoming release. Another layer to the drama is that Bassett shouted out ‘Drivers License’ in an Instagram story, which wouldn’t be the first time a singer has promoted a song (or album) that’s rumoured to be about him.

While Rodrigo reposted several of her Disney co-star’s shoutouts about her new song, she did not share Bassett’s. Shady lady.

Who is Sabrina Carpenter?

OK, now let’s get to the “blonde girl” mentioned in the song. In the first verse, Rodrigo sings, “And you’re probably with that blonde girl, who always made me doubt, she’s so much older than me, she’s everything I’m insecure about.”

Fans are almost 100% sold on this being fellow Disney star from Girl Meets World, Sabrina Carpenter. She fits the criteria: she is blonde, she is older (Carpenter is 21, while Rodrigo is still 17), and she is rumoured to be dating Bassett.

In recent months, Carpenter and Bassett have been spotted together. The two Disney stars even dressed in a couple’s costume for Halloween last year:

This is particularly illuminating as Rodrigo and Bassett did a couple’s costume in 2019, dressing as John Lennon and Yoko Ono. Coincidence??! I think TF not! 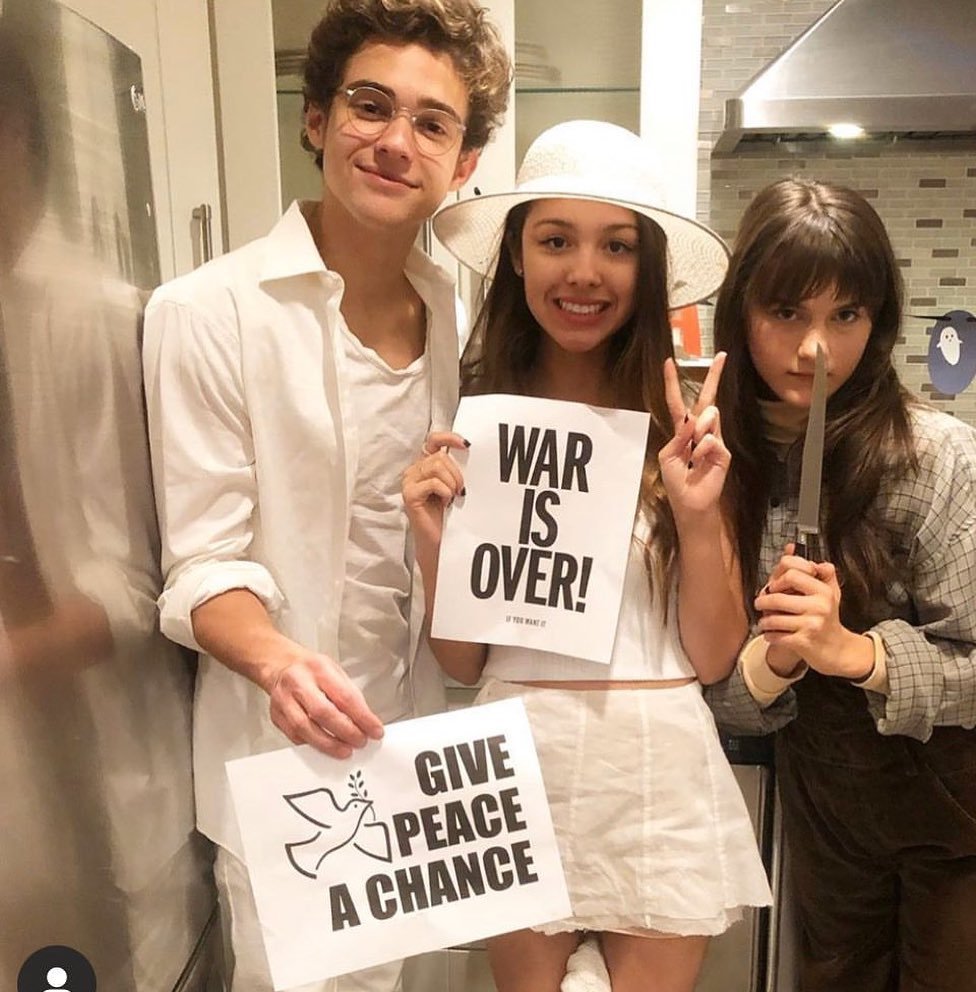 Bassett and Carpenter posting a pic in late 2020 followed Rodrigo posting about a “failed relationship” in August, and the ‘Drivers License’ singer also posted this rather savage Instagram image, alluding to the relationship breakdown.

Carpenter and Basset dating isn’t just baseless speculation either, as they have been photographed together looking like they were on a date. And someone even dug up this old clip showing Bassett react enthusiastically when her name is mentioned. Was he already crushing on her?!

People are TikTok are truly convinced that Carpenter is the blonde girl mentioned.

Oh boy, they have theories.

Why did Rodrigo and Bassett breakup?

First up, it’s important to state that this is purely speculative as neither have even said they dated BUT people on TikTok are convinced that 20-year-old Bassett ended things with Rodrigo because she was too young for him and wanted to wait until she turned 18 to start dating for real — but instead he started seeing Carpenter.

TikTok user @mcboyle_ noted that the date of Rodrigo’s driver’s licence is the date of her 18th birthday, which is a subtle dig at the timing of it all.

So that’s it! It’s all extremely petty, but that’s what being a teen was like tbh.

Who knew that Disney stars could bring so much drama to our lives?!