While last year was a massive milestone in terms of gender equality in Hollywood- women still lag painfully behind in holding lead roles in successful films.

A study just released by the Centre for the Study of Women in Television and Film found from examining 2,500 characters appearing in the top 100 grossing films in 2015, that women made up a mere 22 per cent of the leads, 34 per cent of major characters, and 33 per cent of all speaking roles.

Fuck, a tad awks since women in real life take up roughly 50 percent of the planet.

Yes, significant steps were taken last year. Out of the top 20 grossing films of 2015, seven of the films had female leads from glass-ceiling busters such as Star Wars: The Force Awakens, Hunger Games: Mockingjay Part 2 and Mad Max: Fury Road.

But it is important to note that many of the female-led films that were ranked among the top 100 shared something in common: the female leads were defined largely by their gender. Films such as Cinderella, Pitch Perfect 2, Fifty Shades of Grey and Spy – while bringing in almost a billion dollars between them – did largely rely on the tokensim of the fact that they were ‘female films’.

They weren’t just stories that happened to include a female actress.

Many of the films were rife with gender stereotypes and well-worn gender tropes. For example sixty four per cent of men in the top 100 films were shown at work compared to 44 per cent of women. This tendency to under-write female roles was perfectly summarized in producer Ross Putman’s recent Twitter frenzy– describing how vapid and superficial female protagonists are described.

A way to defeat these kinds of ‘female roles’ commonly created for women is for actresses to take gender out of the equation. As women struggle to find dynamic, complex and interesting lead roles made for women, the trend to take male roles instead may become the go-to strategy.

Sandra Bullock is one actress spearheading this kind of thought-path and has said the fact women needed to resort to taking parts written for men was an indictment of Hollywood’s sexism. “We’re complex, crazy little creatures,” said Bullock. “We deserve to have stories that reflect that. And normalise that instead of it being a rarity. ‘Oh she’s intelligent? She wants to travel the world and do things for herself? Well, that’s weird.’ That’s the way it’s played out for so long.”

While women taking men’s roles isn’t exactly a new trend, it has been done by Angelina Jolie in Salt, Jodie Foster in Elysium, and even Sigourney Weaver in Alien– but it has never occurred with such frequency. First kicked off by this year’s Ghostbusters reboot, 25 years after the last proton pack outing, which became a female driven affair.

Here are some of the upcoming gender-swapping films turning Hollywood on its head:

Sandra Bullock is in the works to lead a new Ocean’s Eleven film, re-imagining the conman brigade as an all-female assembly. Previous star of the film franchise George Clooney will take a producer’s role and Hunger Games director Gary Ross is tipped to oversee the film, which also has the backing of Steven Soderbergh, the director of the trilogy.

The screenwriter of Little Women Olivia Milch has reportedly pitched a first version of the script for the all-female remake. Bullock is rumoured to play the equivalent role of Danny Ocean but no other actresses have signed on just yet. But with actresses Julia Roberts and Catherine Zeta Jones featuring in previous films, there are countless directions the film could take.

Tilda Swinton has officially confirmed that she will play the Ancient One – a role depicted in Marvel Comics as a male character – in Marvel Studio’s upcoming Doctor Strange. Coming at a time when Marvel is increasingly being called out for their lack of female characters in their films, Swinton will play Strange’s mentor and ‘Sorceror Supreme’.

Swinton is no stranger to gender-bending roles and said she was attracted to the character and what direction she could follow. “I just really liked the premise of this and the idea of playing this character. I’m a Marvel fan and I think this particular world that Doctor Strange goes into is really, really, really exciting,” she told  ScreenCrush. “The idea of playing The Ancient One is really just too tickling. I can’t say no to that!” Also starring Bernard Cumberbatch, the film is scheduled for release in November this year. Charlize Theron in The Gray Man

In a lead role originally intended for Brad Pitt, Charlize Theron will take on the gender-switch character of a CIA operative-turned-assassin in upcoming thriller The Gray Man. According to Deadline, the role will be rejigged for Theron in the adaptation of the Mark Greaney novel.

While the thriller novel tells the story of a character that is focused on saving the lives of daughters they didn’t know they had- this obviously may need to be altered when the protagonist is female. Theron will star and produce alongside Joe Roth and with her Denver And Delilah label. In a role made famous by Patrick Swayze, UFC fighting champion and generally kick-ass person Ronda Rousey will star in a reboot of the 1989 film Road House. The original film starred Swayze as James Dalton, a ‘cooler’, or bouncer, who works in a bar.

The rather physical role is a perfect fit for Rousey, with the character involved in fighting – and even killing – the film’s corrupt characters. In getting the role, Ronda even contacted widow, Lisa Niemi to ask permission to take on the remake – and was given her blessing.

Julia Roberts in Secret in Their Eyes

In an American take on the Juan Jose Campanella film  El secreto de sus ojos – which won the 2009 Oscar for Best Foreign Language Film Remakes – the remake by screenwriter and director Billy Ray translated in English to Secret in Their Eyes rewrote a role originally acted by two men to a combined role played by Julia Roberts.

Roberts jumped at the chance to play the role. As Ray said: “If there were great roles written for women, then I don’t think they’d be asking for roles that had originally been written for men,” he told Indiewire. “I think our movie is going to do really well. And I think that people will look at it and look at what Julia did in this movie in particular and I think it will encourage them to develop more in that way.” The film comes out on DVD in March this year. 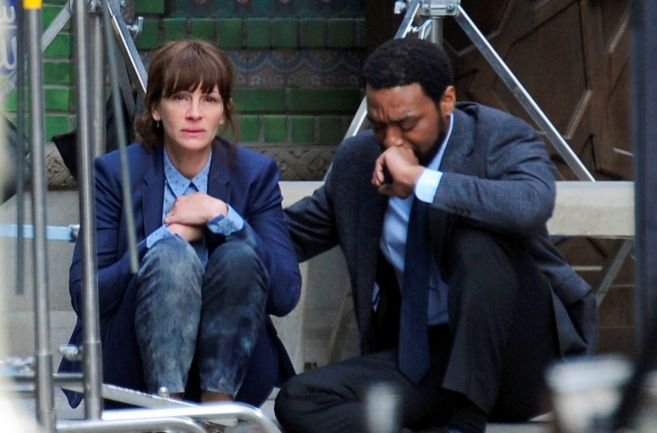 Sandra Bullock in Our Brand Is Crisis

Sandra Bullock is back again, this time she gunned for a role originally written for George Clooney in mind.  When Bullock first read the script for her new film Our Brand Is Crisis, she immediately wanted the lead role regardless of its intended gender. The role was eventually taken by Bullock for the film, directed by David Gordon Green and based on the 2005 documentary of the same name.

Fortunately not a lot of other changes needed to be applied to the character. In the film, refreshingly Sandra Bullock’s lack of partner or child is never a point. Bullock herself said the character was “basically the same, other than the sex”.

Bullock said to People that when she read the script for Our Brand Is Crisis, her love for the role had nothing to do with gender, but the connection she felt to the character.”It wasn’t so much that I said it should be a woman, it’s that when I read it, I knew the voice and I knew how to play it,” said Bullock. The film comes out on DVD in April this year.