There’s no conversation topic that will divide a group of friends like asking which one of Rory’s boyfriends on Gilmore Girls was the best.

Dean was the worst. That is not something up for discussion. He’s boring, didn’t share any of Rory’s interests, was low-key sexist and just absolute trash. Jess is most often considered Rory’s best boyfriend, while Logan (poor, sweet Logan) is commonly pushed aside and only remembered for his more problematic moments.

I get it, Milo Ventimiglia’s beauty can be blinding, but to say Logan was worse than Jess absolutely eradicates how awful Jess was to Rory when they were together.

Honestly I hate Rory Gilmore for not marrying Logan Huntzburger

There’s a small pocket of the internet who have been whispering this for years. After rewatching all seven seasons and the revival, it’s a simple fact (FACT!) that Logan wasn’t actually that bad. In fact, he and Rory were perfect together.

Here a few reasons why Logan was Rory’s best boyfriend on Gilmore Girls:

Logan and Rory looked so good together

Just LOOK AT THEM. They’re perfection.

Jess treated Rory worse than Logan in the early days

Remember the time Jess and Rory took the bus together to school, but then he just left town? Remember how Jess just never called Rory, then expected her to drop all her plans when he was ready to see her? Remember when Jess tried to heavily make out with Rory at Kyle’s party, despite her clearly not showing enthusiastic consent, then when she said she wasn’t into it, he cracked the shits?

Jess was no angel.

Logan also had his share of flaws — like cheating on Rory while he thought they were broken up — but it’s important to remember that Rory and Jess dated for one season, while Rory and Logan dated for three seasons, so there was bound to be more ups and downs.

Fans now look back at Jess with rose-coloured glasses and I’ll admit that when he returned in season six he redeemed himself to an extent, triggering Rory to reassess her life choices (WhY dId YoU DrOp OuT oF YaLe?!). But should Jess’ few good episodes cancel out him being absolute trash in season three? Like Jess, eventually Logan became a better person too and he was a super supportive partner to Rory in the final season, becoming a pillar of strength for her when Richard fell ill. 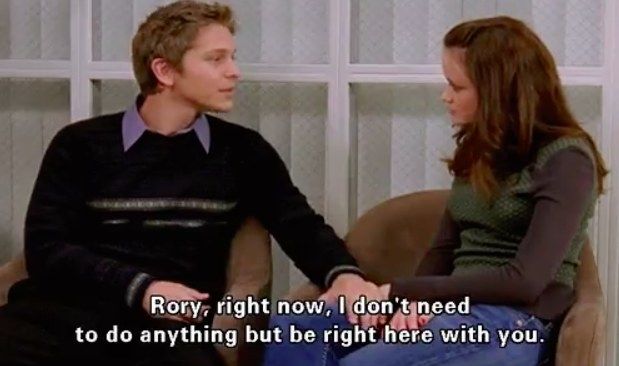 Logan was just as intelligent as Jess

Anyone would sound smart compared to Rory’s first boyfriend Dean, but many fans act like Jess was the only boyfriend ever on Rory’s level. I’d argue that Logan was intellectually also on Rory’s level. Logan challenged Rory constantly and kept her on her toes. When she wrote that judgemental article ridiculing an elitist cocktail party, he was the first to call her out, telling her that she had privilege from those she was passing judgement on. Without Logan, Rory’s college experience would have been totally different.

Jess was never nice to Lorelai and had no respect for her, which filled every scene that they shared with awkward tension. While Logan and Lorelai didn’t get off to the best start, after Logan stole an item from Richard and Emily’s house, they eventually found common ground. When Logan decided to propose to Rory, he knew he needed to first seek Lorelai’s approval. And when he and Rory split, he convinced Lorelai to write her daughter a letter to give him a second chance, showing that he understood how much influence Lorelai had in Rory’s life. Jess would never.

Lorelai's letter to Rory about Logan — on display at the Warner Brother's Studio Tour in Burbank, CA. 🤗 pic.twitter.com/UjnyavLHwy

OK, so he treated Marty badly but he eventually learnt from his mistakes

When we first meet Logan, he was a bad dude. He spoke to Marty terribly, like he was beneath him — although somehow this didn’t dissuade Rory from pursuing him. Logan could be a privileged and entitled twat, but he evolved over time, eventually breaking away from his family, his trust fund and finally wrapping his head around how money works. Also in later seasons, Marty proved to be a total douche so I don’t feel that bad for him.

Rory was at her happiest with Logan

When Jess was with Rory, they were either arguing or getting hot and steamy. There was no in between and Rory never seemed truly happy, but with Logan she was at her best and actually looked content. When they went on a couples trip with Lorelai and Luke to Martha’s Vineyard, this was one of the only times during the series when Rory seemed at total peace. She and Logan had their routine and rituals, reading the morning paper together and it just felt right. They could/should have grown old together.

LOOK AT THIS BEAUTIFUL BOY. AN ANGEL HERE ON EARTH.

Logan and Rory were still dating in the revival, so clearly Rory made her choice

Whether you like it or not, in the battle of the boyfriends Logan has already won. In the revival, we found out that he and Rory were still seeing each, albeit while dating other people simultaneously. Sure, both Dean and Jess make cameos in the revival, but it’s clear only Logan stayed a constant presence in Rory’s life.

He also flew back from London to cheer Rory up after she lost her book deal, which showed how much he still cared for her. They ended on good terms, before we found out in the final minutes of the series that Rory was pregnant, and tbh Logan is the most likely father.

Rory made her choice: it’s Logan. Now, let’s pray that the revival gets a second season and we can see these two crazy kids finally get together, as it should be.