One of the best parts of being a kid was the excitement of heading to Macca’s and getting a Happy Meal toy.

But this fast food trip was especially exciting in the 2000s because the toys McDonald’s gave out with their $5 boxes of joy were truly top tier.

From adorable plush toys, to plastic characters from the biggest kids’ films of the time, to those little music sound boxes that help us out before Spotify was a thing, the Happy Meal team at Macca’s were working overtime to keep us happy.

So let’s take a fond look back at the most iconic Happy Meal toys from the ’00s that will instantly transport you right back to your childhood: These plastic Happy Meal toys became bath time staples in my house, which was kinda gross considering water would leak out of the plastic fish bodies days later.

But these Finding Nemo toys were iconic — Nemo would giggle, Dory spoke whale, and Bruce’s eyes would light up. I distinctly remember constantly getting Gill’s mean ass and always being furious about it. But as an adult, I get Gil now. I resonate with the fed-up fish so much.

Before everyone was trying to collect oversized Squishmallows, kids were desperate to get the pug ‘Dog’ Happy Meal toy in the 2000s.

If you somehow don’t remember, each pup came in its own plastic case and had a collar that noted its breed with a spot for you to name them. Absolutely iconic Macca’s era. 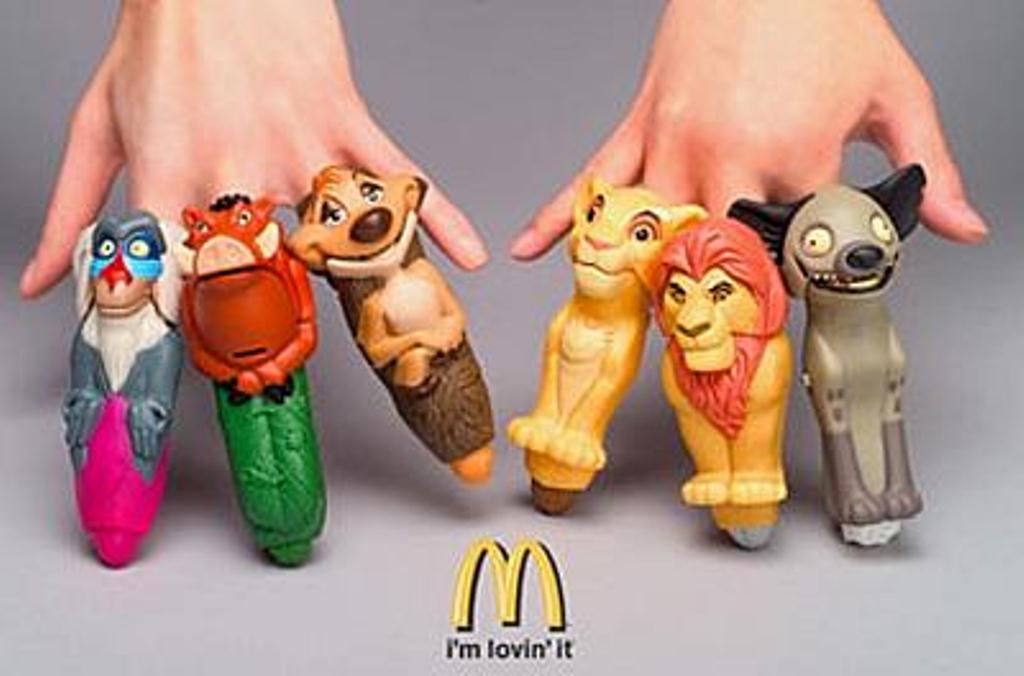 The superior Lion King toys were the cute little plushies that came out in 1998, but these cursed finger puppets were a close second.

Far too long to fit a child’s hands, these plastic puppets would slot over the finger and make noise when you tapped the bottom on a hard surface. Simba would growl, Timon would say “Hakuna Matata”, and Ed the hyena would let off the most horrifying laugh. Real nightmare fuel. 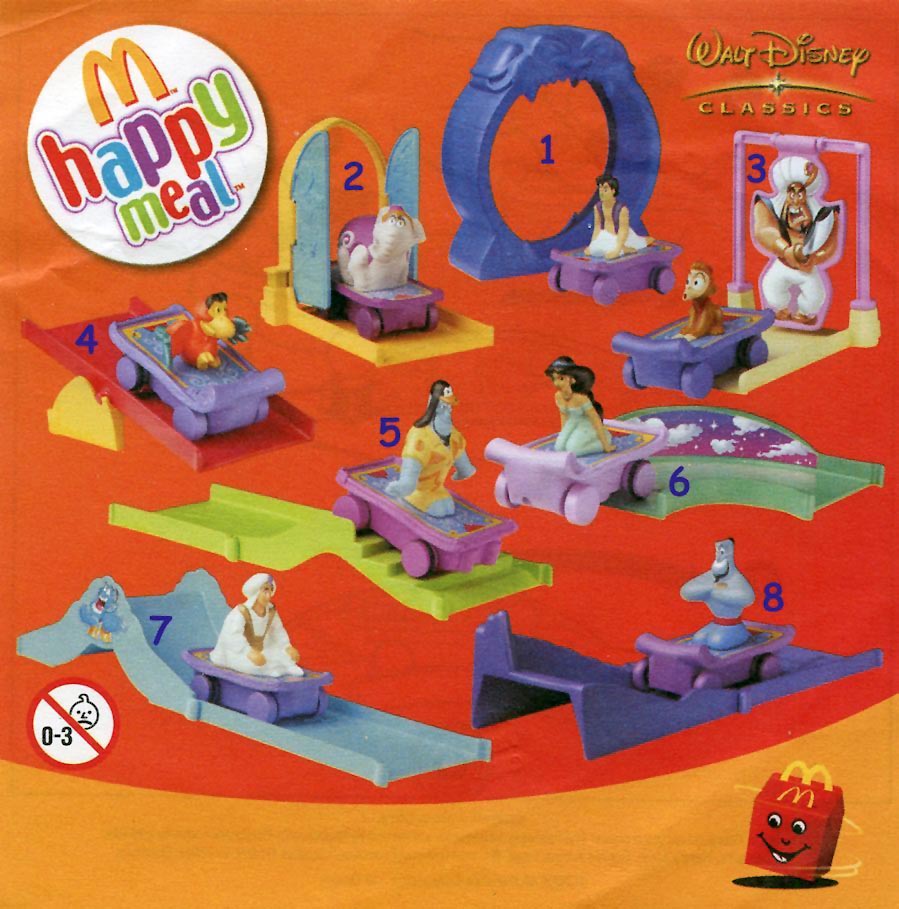 If McDonald’s were going to do anything in the noughties, it was collab with a trending kids movie to create the most exciting junk — and that includes the Aladdin magic carpets.

I literally found the Genie magic carpet in a box of my childhood stuff the other week, so I can say with confidence that these Happy Meal toys really are indestructible. In 2006, Macca’s really stepped up the Happy Meal toy game with these Strawberry Shortcake keychain dolls.

While the doll was cute, it was what was inside the doll hats that made it the most sought-after toy for every little girl in 2006: the hats full of sticky lip balm. A parent’s dream, I’m sure! One of my first memories of a McDonald’s trip was walking away with a cheeseburger in one hand and one of these bad boys in the other. These days, Macca’s has pivoted to giving out Mr. Men books over the plush dolls, but I don’t care.

You’ll have to pry my Mr. Clumsy doll out of my cold, dead hands before I swap out a toy for a book. 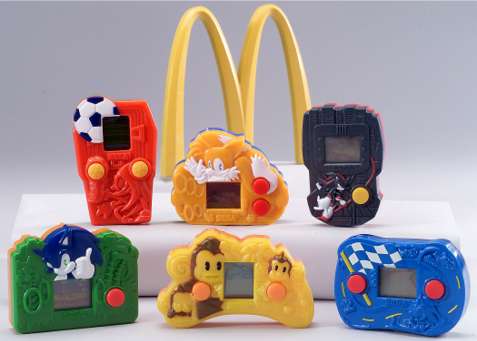 When I saw Macca’s had the handheld Sega-branded LCD mini-games, that’s when I knew the company had MONEY.

They were honestly the most basic games imaginable but being able to play soccer with Tails, skateboard with Sonic, and have a round of basketball with Shadow was the most thrilling thing that happened in my life as a nine-year-old. 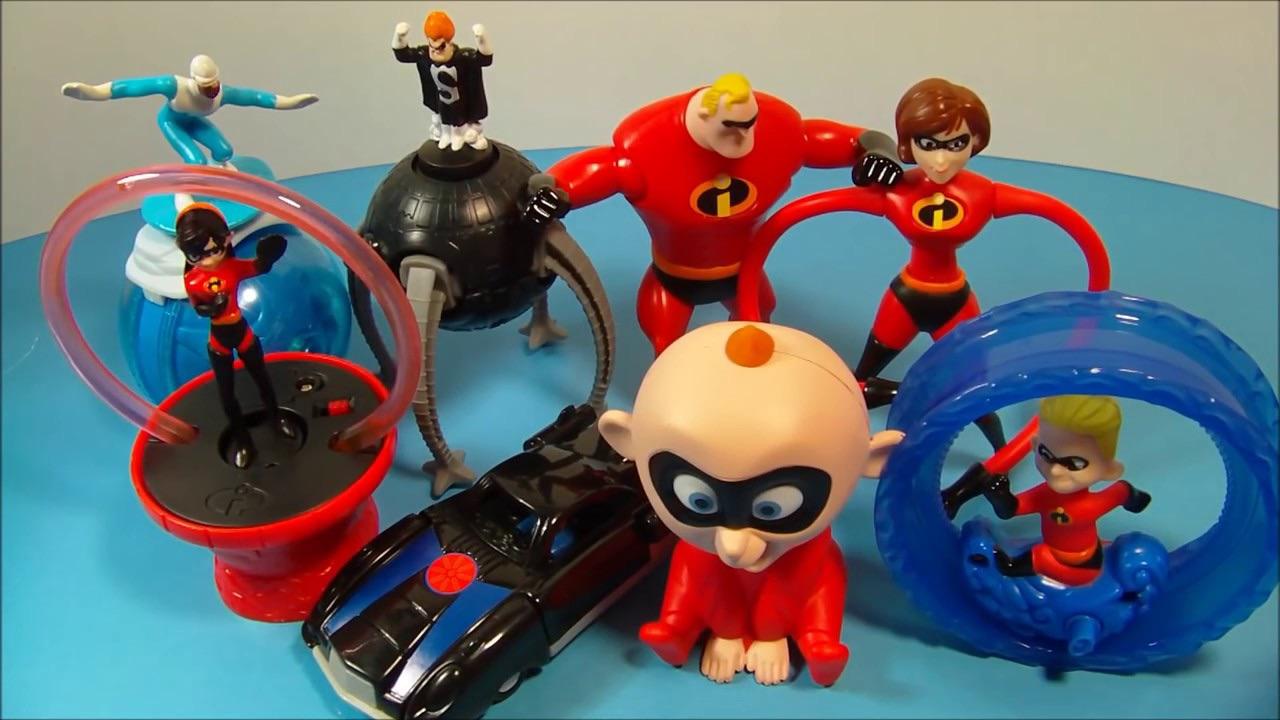 The only thing I can remember about The Incredibles toy was Dash and his little water ring that showed just how fast he could run on water. It honestly broke my tiny child mind.

Oh, that and the way Mrs. Incredible’s whole top half was like jelly and you could viciously shake her around, which was quite horrifying actually. One of the most iconic Pixar X McDonald’s collabs was 2001’s Monsters, Inc.

Macca’s could’ve made the toys boring by having just plastic figures, but the addition of the doors, just like the ones in the movie, made it feel special. Maybe I would pretend I was in the movie while I ate my nuggets… don’t judge me. I was seven. Considering the legit Poo-Chi dogs would go for around $100 in 2000, it’s quite surprising that Macca’s just chucked a mini version into Happy Meals.

Of course, the quality and capabilities of the Robo-Chi Pets weren’t the same as the actual toy, but you could feed Poo-Chi a bone and it walked around, which was more than enough for me. Plus, there was also a cat and bird version, so can we really complain? I don’t care what anyone else thinks, the most iconic toy Macca’s ever came out with was those little speakers that played a song chorus on repeat through the most tinny-sounding speaker.

The Veronica’s ‘Untouched’ obviously takes out the top spot, but Bob Sinclar’s ‘Rock This Party’, the Crazy Frog song, and ‘Mambo No. 5’ were just as iconic too.

I mean, just listen to this beauty? How could you not love it.