I Binged Netflix’s ‘Love Is Blind’ & I Have Many, Many Questions

Right now my whole existence is simply dividing my time between three shows: Married at First Sight, Australian Survivor: All Stars and a series that has taken over my life, Netflix’s new reality dating concept Love Is Blind.

The reality series premiered at the beginning of February, and the premise of the show is testing if people can fall in love without meeting face to face. Instead the contestants are made to communicate in separate pods to form connections with each other. The series is a mix of MAFS and The Circle, with a splash of The Bachelor thrown in for good measure, and in the last week it has amassed a huge following online.

Me in the first 5 minutes: wtf is this show this is so dumb
Me at the end of ep 1: why am I crying and obsessed with everyone #loveisblind pic.twitter.com/u8dkVBz7p9

The ten-episode season sees six couples get engaged and five couples get past the honeymoon stage: Lauren and Cameron, Jessica and Mark, Amber and Barnett, Gigi and Damien, and Kelly and Kenny.

It’s the kind of addictive show that you just start casually watching, then all of a sudden you’re six episodes deep and screaming to your cat about how “MARK DESERVES SO MUCH BETTER?!?!”

Mark is stressing me out because Jessica doesn’t want him and he’s not seeing it #LoveIsBlind pic.twitter.com/49UVrt60ry

The reality series is particularly compelling because of contestants like Jessica — a very complicated woman. When she isn’t obsessing about the age gap between herself and her fiancé (did you hear it was ten years?!), she’s talking nonstop about another woman’s fiancé. She’s a messy bitch but absolute TV gold. Seriously, can this show never end?

Ahead of the finale dropping this week where we finally find out which couples chose to actually get hitched, I have a few questions I simply must ask.

I Watched Love Is Blind On Netflix & Have Many, Many Questions:

1. OK, so this is a dating show where they only interact in pods and don’t see each other before proposing? Is this show next level Married at First Sight?

No one:
Absolutely no one:
Every couple, after 2 dates, on Netflix's Love is Blind: pic.twitter.com/ehnGe86Ohi

2. Is it weird I would honestly rather speak to men in pods rather than go on dinner dates and have to share my plate of garlic bread? (HANDS OFF!)

3. What TF does Lauren mean by IF Shrek had a good personality? HOW DARE SHE?

4. What do all these beautiful, successful women see in this Barnett man?

(Like obviously they can’t see him but he sounds like a dudebro who has never met a plain white t-shirt he didn’t immediately buy.) 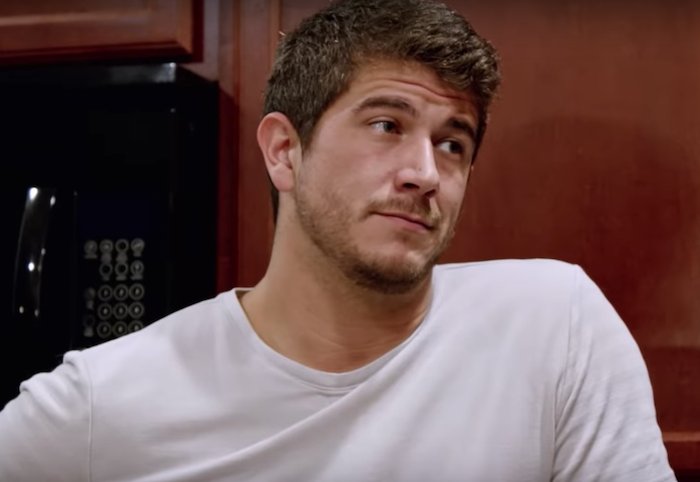 5. Why is Carlton falling asleep before fleeing his date with Amber so iconic?

6. Why does Cameron (the scientist) speak with such sadness in his soul?

I want to give him a hug.

7. HOLD UP. How are these people saying ‘I love you’ after three damn days?

(I wouldn’t even say it after three years! Gotta keep ’em on their toes!)

My literal reaction at watching people getting engaged and saying ‘I love you’ after 3 days, without ever seeing each other on #LoveIsBlind #loveisblindnetflix pic.twitter.com/PFBQNSsGdX

8. Why does Jessica (a grown-ass woman) speak in this weird baby voice only when she interacts with men? Is she OK??

9. Barnett is playing these women like a fiddle. How can no one see he’s just a fuckboi sitting in a pod?

10. Why would Mark propose to Jessica after she pretty much chose Barnett over him?

HAVE SOME SELF RESPECT.

11. Kelly and Kenny are the most basic people on earth, have they heard of reading books meant for adults and not actual babies?

12. Why is Jessica so freaked out by Mark being 10 years younger when Barnett is seven years her junior?

13. Is Damien the dullest human on this earth and what the hell does Gigi see in him?

14. Okay, so everyone has proposed and it’s honeymoon time. Ooft, Carlton and Diamond are over even before they began. Why was Carlton being bisexual a big deal, while him referring to himself as “daddy” was fine?

15. So wait they’ve moved into their homes and Jessica lives in an apartment overseeing Barnett’s place?? Isn’t that straight-up creepy?

16. Honestly, can Jessica just STFU about this age gap shit?

Get over it already.

Jessica: when the child is 14 I'll be 60.
Mark: yes and I'll be 50, because that's how math works.#LoveIsBlind pic.twitter.com/NjkpmEJ9z6

17. Are my eyes deceiving me or did Jessica actually just pour her dog some red wine?

18. Did Jessica only agree to Mark’s proposal so she could spend her time day drinking and thirsting over Barnett?

19. HOW HAVE KELLY AND KENNY NOT EVEN BANGED AND WE’RE ONLY HEARING ABOUT THIS NOW???

She seems proud of the fact she can choose when she works but chooses never to do so.

so amber came on #LoveIsBlind with no home, bad debt, no stable job, her credit terrible…but she yelling at barnett bcs his bed wasn’t made and told him get it together…. pic.twitter.com/jDemb3Naiv

21. Amber has a credit card just for makeup shopping but still hasn’t paid off her $20k student debt. Have I ever related to a person more?

22. Do the contestants actually have to pay for their own weddings?

I guess Netflix blew their budget on pod furniture and that snazzy communal kitchenette.

23. Is Jessica trying to kiss Amber after almost getting into a fistfight the chaotic energy we need in 2020?

24. Jessica is going to smash Mark’s heart into a million pieces, isn’t she?

If there’s one thing we can all agree on it’s that Jessica is the worst #LoveIsBlind pic.twitter.com/3rvqBuxvgW

The finale of Love Is Blind drops on Netflix on Thursday, February 27 at 7pm AEDT.