Fresh from leaving the experiment on last night’s Married At First Sight, Cyrell has come out swinging against her TV hubby Nic. There’s soo much tea, fam. Hope you’re thirsty.

In an explosive interview with the Kyle and Jackie O Show, Cyrell has alleged that not only was Nic only on the reality series for fame but she also accused her former TV spouse of “leaking” his own sex tape.

“I know for a fact it’s him that leaked it out, because he kept on sitting there begging me (saying), ‘C’mon Cyrell I know you know which friend it’s from, I just want to know so I can cut them from my life,’” Cyrell told the hosts.

“I turned around and I said, ‘You know what Nic? The mere fact that you can’t figure out which friend it was, how many did you send it to?’ Now you want to go on radio and say I feel so sorry for this girl, when you leaked it out you weren’t feeling sorry for her.”

Cyrell said that she had suspicions Nic wasn’t there for the right reasons all along but this was edited out.

Cyrell calls out producers for some points of editing pic.twitter.com/7V8gpxOomh

Cyrell also alleged that there was more going on between Nic and Jessika than what we saw. “I don’t like Jess as well, but when Jess turns around and says you know what, Nic initiated the flirting, completely agree with that too,” Cyrell said, adding she noticed Nic had wandering eyes at the dinner parties.

“If you want to flirt with other wives say it, if you want to be with someone else say it, but don’t make me look like a fool and defend you with so many people,” Cyrell said.

“As a woman, you can see when your man has eyes on another female, you know … some of the other wives used to text me and be like, ‘Look, dude, I’ve seen Nic being a bit like this,’ and it’s like, you see it yourself though … it is torturing.”

And we ain’t even done yet.

In a series of text messages between Nic and Cyrell published in Woman’s Day, it appears to show that the groom was more interested in getting screen time than actually pursuing a relationship.

In a published message reportedly from Nic, he seems to be trying to convince Cyrell to stay because the other contestants don’t make interesting TV. 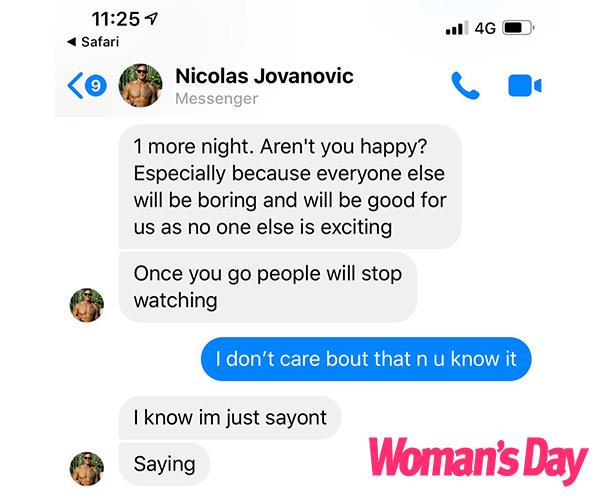 In an interview earlier today, Nic responded to the recent statements from Cyrell telling the Hit Network: “It seems to be whenever things go bad for Cyrell on TV or with her family or anything like that, she goes out of her way to bring me down.”

In the biggest surprise so far, Martha seems to be backing up Cyrell’s claims that Nic is just out for fame.

In a series of Instagram stories that have since been deleted, Martha called out Nic, calling him “fame hungry”.

Martha then posted a screenshot of direct messages between her and Nic.

And she also posted a screenshot showing Cyrell admitting Martha was telling the truth regarding what happened between Nic and Jess. In an interview, she went on to defend Cyrell over what went down with Nic. “I think Cyrell was hurt because she actually did really try with Nic,” Martha told Yahoo Lifestyle.

“She really was investing in it and just really wanted Nic to have her back.”

Are we all caught up? That was exhausting and I need a stiff drink.