Everyone Shut Up: This Is The Definitive Ranking Of Instant Noodles

There is no greater pleasure than coming home from a long, hard day (of reading about reality TV on the internet) and chowing into a cup of hot, fragrant instant noodles.

Growing up in Australia, eating two minute noodles was very much the norm. Whether you ate them raw (like a savage) or cooked them (like a normal, sane person), for many households there was always a packet of noodles in the pantry. They are the perfect after school snack.

While I have fond memories of specifically Maggi chicken noodles, I can’t quite remember what variety of instant noodles were the best, so I thought it was time to put the most popular brands to the test.

IT’S TIME TO RANK SOME NOODLES.

For the purpose of this ranking, I’ve only selected the popular noodles you can buy from Coles, Woolies, and Aldi that are all priced below $2 a cup. I am well aware of all the delicious ramen varieties available at Asian grocers but sadly I cannot be tasting 30 different kinds of noodles — well, not for this particular article anyway.

These are the brands I tried:

I stuck to the three most popular flavours: chicken, beef and mi goreng (also known as “oriental” by some brands). So with all of the above varieties in three flavours, all up I tasted 13 different noodles.

This was my Everest… Oh man, I ate a lot of noodles. I now consider myself half woman, half noodle. I’m sweating out chicken salt sachets!! I have dried corn coming out of places I don’t wish to divulge!! I’m not OK?!

The definitive ranking of instant noodles from worst to best:

Don’t come for me but all my fond memories were lies because these noodles are trash. The broth is just gross and sad. The liquid is pale and almost colourless. The chicken flavour is weak and barely there at all. I expected the overall seasoning to at least be salty but it’s just so meh.

PLS DON’T SEND ME THESE NOODS. These are just so bad. They don’t taste like anything??? The beef broth is such an insipid colour and they taste like watered-down nothing. I don’t believe the person who made this has ever even met a cow. These noodles taste like lies and deceit. Simplee’s chicken noodles are only fractionally better than the beef but still rubbish. It’s the most basic of flavours imaginable, the seasoning mostly just tastes like salt and the liquid is weak and watery. Simplee are very obviously a Fantastic dupe, and Fantastic are almost as bad. They have a slight edge for having more herbs in their sachets than Simplee, so the noodles appear slightly more appetising. But these beef noodles basically just taste like liquid salt. Beef? They don’t know her. Fantastic’s chicken variety is a tiny bit better than the beef (they at least taste vaguely like chicken) but the main issue is that their noodles soak up most of liquid super fast but fail to keep any flavour. Where is the broth?? Where is the taste?? Not a fan. Not AT ALL.

The “oriental” flavoured noodle is so damn vague that it could mean basically anything, which is demonstrated by this cup: the basic bitch of oriental noodles. Aside from vague garlic and soy notes, there’s nothing about this that is particularly oriental.

Then there’s the fact that unlike the other flavours I tried, this cup comes without any kind of dried vegetable sachets — instead just a powder. Ugh. Ya basic! Lord, give me strength. I don’t know how this is “oriental” — it’s just salty! Very, very salty! Like Fantastic’s chicken and beef, the broth absorbed super quickly and the noodles were left with no flavour. Bad! Bad noodles!

I am shook. These Maggi noodles are not terrible and out of all the beef flavours, these are the only ones that truly taste and smell like roast beef. I was impressed with the broth which was a deep brown and super fragrant, but my main issue was that the flavour got a bit boring after a few gulps. 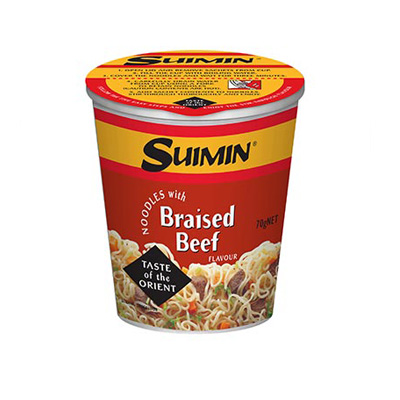 These noods come with a strong flavour that packs a punch which meant that this variety was by far the best of all the beef options. While the taste itself isn’t that amazing (it has a weird aftertaste imho), bonus points for the cup coming with bits of beef in it which feels boujie AF. I was ready to give up on Simplee but then tried their mi goreng variety and I finally saw the light. These are good. They come with two different sauce sachets: one sweet soy and another with garlic oil. The flavour combo is damn good and I’d happily chow down on these any arvo. 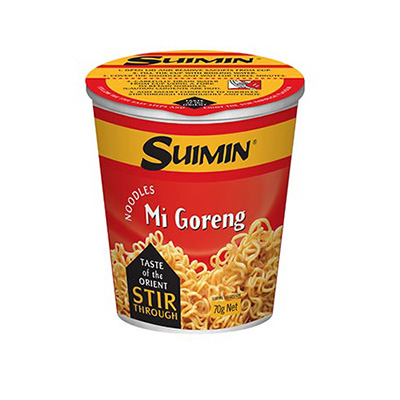 These are just straight-up delicious. Coming with separate sachets to mix up the perfect mi goreng flavour, the end product is deeply yummy with the dark sauce creating a really nice mix of seasoning and spices. There’s a reason these noods are iconic and they sure did deliver. Serving up a complex flavour combo derived from five different flavour sachets, these noodles actually resemble the kind of mi goreng you might eat outside of a paper cup and that’s a victory in itself. 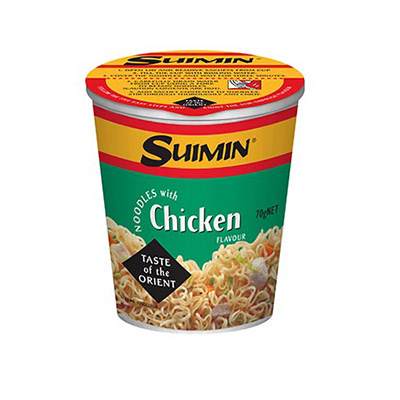 KING! I was ready to crown Indomie the winner until this saucy little cup of noods waltzed into my life and changed me forever. Suimin’s chicken noodles are fucking amazing. The flavour is so complex and delicious, plus the aroma is absolutely mouth-watering. I demolished this cup in under two minutes! I’m a maniac!

Maggi chicken noodles may have done me wrong, but Suimin has brought me back to life.