I love scammer stories. For some dark and twisted reason, there’s something about a celebrity or well-known figure duping their friends or followers that absolutely captivates me.

More specifically, I love scammer stories about people who are bad at scamming. From Caroline Calloway to Fyre Festival’s Billy McFarland, the ways famous people consciously (or unconsciously) try and then fail to deceive people is like oxygen to me.

This fascination led me to an internet star that you’ve probably never heard of, but whose story occupies my mind rent-free. His name is, currently, Troy Becker. I say currently because his name wasn’t always Troy Becker. In fact, he was once known to his millions of followers by an entirely different name: Paul Zimmer.

To explain how this came to be, I need to go back to the beginning, to a time before TikTok was TikTok, when it was called Musical.ly and was a place where teens would lip sync to popular songs.

Paul Zimmer (actual surname Gutowski) was huge on Musical.ly, popular for his good looks, inane videos, and immature sense of humour. By 2017, he had amassed a following of seven million — which, at the time, made him one of the most popular people on the app. Eventually, Musical.ly became TikTok, so his follower count transferred over, giving him a massive reach on an app that was set to take over the world.

As his popularity skyrocketed, Zimmer got in over his head. He started taking payments in exchange for duets and shoutouts, but after accepting money from his young fans — mostly teen girls — he then wouldn’t follow through with his promises. In short, he scammed hundreds of teens out of money. This didn’t go unnoticed and as more kids were scammed, they started to call Zimmer out under the hashtag #BanPaulZimmer.

Instead of apologising, or even returning his victims’ money, in early 2018 Zimmer dropped off the grid. He stopped posting on TikTok, deactivated his Instagram, and deleted his YouTube channel.

After quitting social media, Zimmer got married and even had his first child. Then one random day in October 2019, Paul Zimmer returned to the spotlight with a truly baffling Instagram post that needs to be seen to be believed.

After reactivating his Instagram, Zimmer had wiped all his old photos, and posted that he had found his doppelgänger: a 16-year-old actor named Troy Becker. 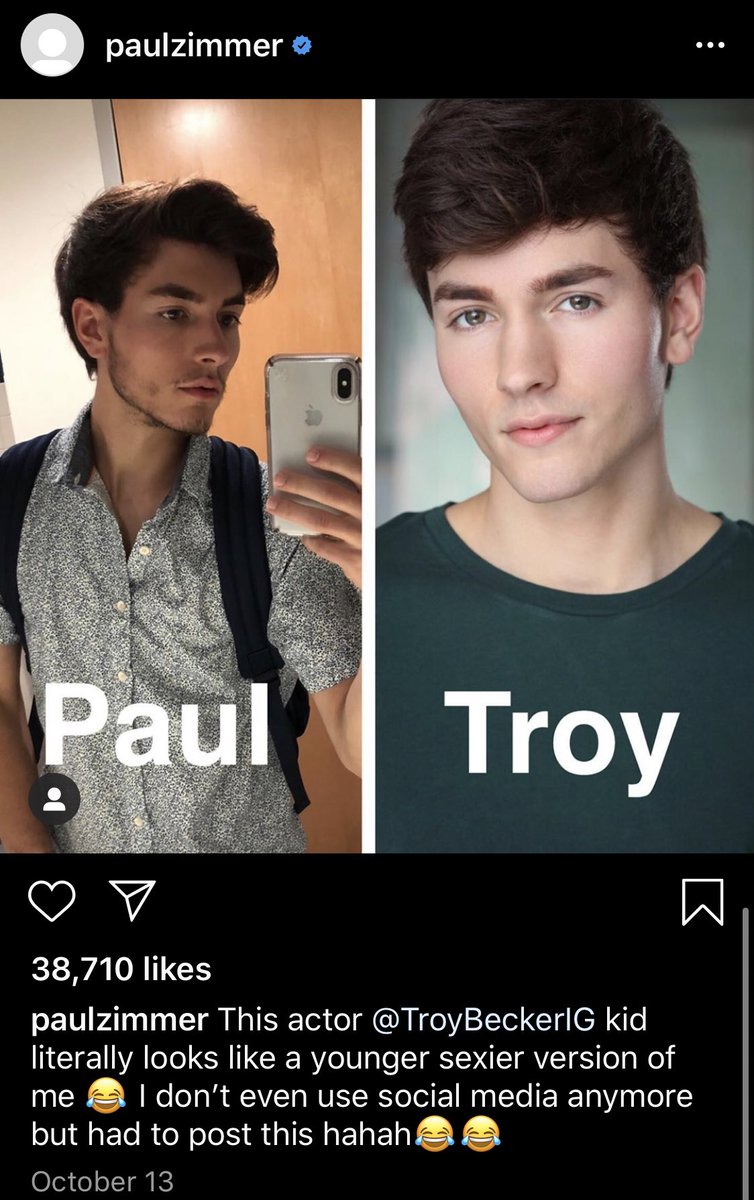 Zimmer (left) is shown with a short beard, posing beside a headshot of his apparent “younger sexier version”, and it’s not hard to see that…the guys in these pics are absolutely the same person.

The handle for Troy led to an Instagram account with barely any followers, and a link to this IMDb page.

Reminder: This is Paul Zimmer. And it gets stranger. A few months later, Zimmer announced that he was giving all of his social media accounts, with their millions of followers, to Becker, an apparent stranger who just happens to look like him. ‘Becker’ then took over Zimmer’s TikTok, under the name @TroyBeckerReal (I’m not making this up!) and posted a video where he told Zimmer’s millions of followers: “My name’s Troy Becker, I’m an actor. Paul Zimmer reached out to me and asked to record a video because he says he really, really looks like me and he wanted to post it to something called TikTok. So here you go, Paul Zimmer.”

Watch it below and try not to laugh uncontrollably:

Please note that this 16-year-old actor living in LA has ‘never heard of TikTok’.

It doesn’t take a genius to see that Paul Zimmer and Troy Becker are 100% the same person, and immediately Zimmer’s following started flooding his posts telling him that he wasn’t fooling anyone — and also it was low-key creepy that he, a 24-year-old married father, was impersonating a teenager.

It was clear to anyone with eyes and ears that Zimmer was simply trying to rebrand as someone new, in an attempt to escape accountability for what he did to his fans on Musical.ly.

For months, Troy Becker continued to post on TikTok, like no one would notice he was Paul Zimmer. Every time Troy would post, he’d be bombarded with comments like “Paul it’s really creepy you’re pretending to be 16” and “CEO of pretending to be a different person”.

This led to countless TikTok and YouTube videos exposing him, with the most popular Paul/Troy debunker at the time being YouTuber Danny Gonzalez. And the memes were perfection.

After months of fans being baffling by Becker maintaining that he was not the Musical.ly star, finally the jig was well and truly up when an exposé in the New Statesman was published in early 2020, which led to the story exploding online. In turn, Becker deleted all of his social media accounts.

But… he came back! Becker posted on YouTube to reveal — drum roll, please — that, okay, he is Paul Zimmer, though he now ‘identifies’ as Troy Becker. In 2019. he also legally changed his name.

The video does not address why he fabricated a story that he discovered a “younger sexier version” of himself, who was “15 or 16 years old”. Becker does not apologise to his young fans for deceiving them, nor does he admit to scamming his Musical.ly following.

I wish this was where the story ends but after I did some digging, I found some weird shit that might suggest that Becker is still living an inauthentic life to this day. Under the above video which is unlisted, the description reads: “These are my only social media accounts.” However, the description for Becker’s YouTube channel says: “I remember when Troy Becker liked my Instagram picture 10/15/19, I’m trying to repost all of Troy Becker’s old YouTube videos, I love him so much and miss him, I wish he would come back to social media.”

This is the above video’s caption:

This is what is written on the YouTube channel’s ‘About’ page:

By coincidence, the YouTube channel was created on the exact date that Becker posted his explanation of the controversy…err, on that very channel. Despite this, the YouTube page appears to be trying to present like it’s run by a Becker fan account, with many of the channel video descriptions saying stuff like: “This is one of my favorite Troy Becker videos hahahah.”

It’s the same story with his website, which also features videos from the YouTube channel. While it claims to be the ‘Official Website for Troy Becker’, what is written on it appears like it’s (again) Becker pretending to be someone else.

The website’s bio offers a bizarre justification for why the former internet star pretended to be a 16-year-old actor, as Becker or someone who has spoken to Becker claims that friends of his…made him do it and hijacked his social media accounts. Read the full post here. Here’s a summary. Try to make sense of this:

“We have reached out directly to Troy Becker to gather the truth on all of the drama that he has been wrongfully involved in years ago,” the bio begins.

“Some work associates that helped Troy Becker bring the character Paul Zimmer to life, that he thought were good people and had his best interest in mind, started a group chat…Eventually certain people in the group chat convinced Troy it would be funny if he made videos as (Paul Zimmer The Character) saying how he and Troy Becker look alike but we weren’t the same person.”

The post continued, “Now these videos were clearly jokes and they were meant to ONLY be in this group chat, nowhere else….But someone inside of that group chat took those videos, ALL the videos that he made as jokes between his friends and they posted them on his social media accounts with the most ridiculous captions. They then changed the passwords to all of the accounts, and by the time Troy was able to get back into the accounts the damage had been done. That’s when the articles and videos and everything hit their peak….After that he ended up making a YouTube video explaining everything (everything he just said above ^) the video was well received from his millions of fans.”

The YouTube video mentioned currently has just 340K views. It was not seen by “millions of fans” and the comments are turned off, so no one would know if it was in fact “well received”. Becker himself links to this website on his Instagram and TikTok, so this bonkers explanation is obviously endorsed by him.

Look, I don’t actually know who wrote the above explanation for the controversy, whether it was a fan running Becker’s website or Becker himself. But it’s clear that Becker is still trying to prove that he is bigger and better than he is.

He may no longer go by the name Paul Zimmer, but he’s still playing a part.

We reached out to Troy Becker, but he declined our invitation to be interviewed for this story.