Just Hear Me Out: Aidan From ‘Sex And The City’ Actually Sucks

Growing up, I was never allowed to watch SATC because it was too raunchy for my then-Catholic schoolgirl eyes. Considering I was 14 when the series wrapped up in 2004, that makes a lot of sense. I caught the odd rerun from time to time later on in life, enough to know who all the characters were and what they stood for, but not enough to understand the show in all its entirety.

Watching it as an adult in my early-30s has been the one small joy I have in lockdown. It goes without saying that parts of Sex and the City have aged badly, but as I navigated my way through each season, I finally felt something could distract me from the never-ending doom of the COVID pandemic and Sydney’s endless lockdown.

The struggles Carrie, Samantha, Miranda, and Charlotte faced as single women in their 30s and 40s are still somewhat relevant in today’s society. In 2021, we probably wouldn’t have a lead character like Carrie lose it over a guy as average as Big, but regardless it’s still relatable in the sense we’ve all lost our minds over someone at one stage in our lives.

However, there’s one character on the series I have a massive issue with and it’s Aidan Shaw. Painted as a white knight, the kind of guy you’d marry and settle down with, Aidan (played by John Corbett) is meant to be the antithesis to Big. Now, there’s no denying Carrie was pretty awful to Aidan – she cheated on him, she was closed off with her emotions, she never could fully commit to him. But just because she was immature in their relationship, doesn’t make Aidan the “perfect” man for her, or for anyone. In fact he was often passive-aggressive, backwards, and suffocating.

And let’s not even get started on the way he talked.

Don’t believe me that Aidan really does kinda suck? Let’s unpack it all.

Here are all the times Sex And the City‘s Aidan Shaw was the worst. 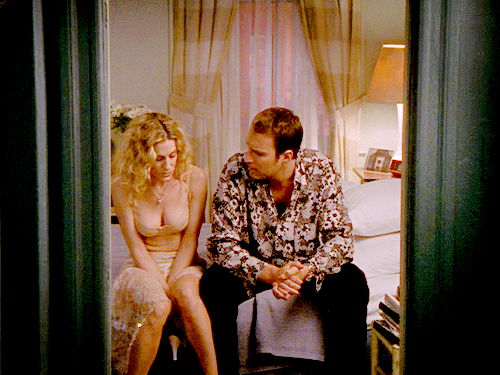 When he flirted with the waitress at the bar in front of Carrie.

There’s no denying Aidan would’ve had some trust issues when he and Carrie decided to give their relationship a second chance after her cheating. Except somewhere along the line, Aidan forgot that he was a consenting adult who also had a choice in the two getting back together.

In a scene at his and Steve’s bar Scout, Aidan openly flirts with bartender, Shayna, when Carrie swings by to see him, and while she tries to act cool and cute, he pretty much straight-out ignores her – only giving attention to the pretty bar lady in front of him. It’s a deliberate dig to upset Carrie, and it’s beyond petty.

When he slapped the nicotine patch on her.

This is another instance of Aidan’s passive-aggressive behaviour continuing after he and Carrie had gotten back together. This all comes after Big left a voice message on Carrie’s answering machine – Aidan’s behaviour started with telling Carrie she needed to brush her teeth in the morning and ignoring her affections. Instead of expressing anything was wrong, he just decided to treat Carrie like shit to punish her. In one scene we see Aidan aggressively slap a nicotine patch on Carrie’s shoulder, and he doesn’t even apologise when she expressed he was hurting her.

This passive-aggressive behaviour continues until she finally snaps and begs for his forgiveness. When all he wanted to do was stay at home with his fried chicken.

OK, so things were all A-OK in the Aidan and Carrie world. Peace was restored. He had stopped being a passive-aggressive dweeb. But as soon as that was over, the boring, sleepy part of the relationship kicked in. Carrie wanted to go out on a Saturday night. Aidan’s ideal Saturday night was staying in with a bucket of KFC. While Aidan was patient with Carrie in many ways – like giving her space when she asked for it – there’s no denying there’s something not that exciting about a boyfriend who’d rather stay in and sit on the same armchair every night and call that life.

When he was judgemental over Miranda potentially having an abortion.

When Miranda found out she was pregnant and was considering an abortion, it was clear Aidan wasn’t in favour of the decision. That could’ve just been because he was close mates with Steve – but the fact Carrie felt like she couldn’t even tell him about her own abortion 13 years previously says a lot about Aidan’s character in that moment.

When he told Carrie she shouldn’t speak to Big again.

Look – I think it’s pretty normal to not love your partner talking to their ex, especially the one they cheated on you with. But, no relationship with rules and being told “what to do” set by one person is going to end well.

When he had to have a physical fight with Big to get over his jealousy of him.

Carrie inviting Big out to Aidan’s country cabin is a whole ‘nother thing, but Aidan having a physical altercation with Big in order to finally getting over his jealousy and move on? Stupid. And then there’s the whole macho thing of having to label himself as the Green Hornet to go up against Big’s Batman. GROW UP!

When he pushed getting married onto Carrie.

Aidan’s trust issues got the better of him throughout their relationship, but when he pushed getting married onto Carrie — even though she clearly didn’t seem ready — it said a lot about how he prioritised his needs over her. Aidan was looking to get married not so much because he wanted to – but because in locking Carrie down, he believed he wouldn’t be able to be hurt by her again.

So when she wanted to take things slower and refused to marry him on a whim after their night out (even though she was wearing white! A sure sign she must want it, right?!) that was the last straw for him because he took it to mean she didn’t love him. To which Carrie perfectly called him out with, “I love you but I can’t marry you to make you trust me.” When he bought the apartment next door to Carrie, as well as hers, then gave her only 30 days to buy it back when they broke up.

OK, so objectively by buying Carrie’s apartment he was originally doing her a favour – her building was going co-op, she either had to buy or vacate, so Aidan suggesting he buy her apartment and the place next door and they move in together made sense at the time.

When they broke up, however, he only gave her 30 days to be able to put down the deposit to buy her apartment back, otherwise she’d be evicted. Normal behaviour! Definitely not a power-play or anything!

At the end of the day, there’s no denying Carrie and Aidan’s relationship was a toxic mess…

Upon rewatching Sex and the City, I think it’s safe to say we can stop glorifying Aidan as this hard-done-by man who was the ideal love interest and “perfect man” for Carrie, because that just ain’t the total truth.