In the Sex and the City universe, women go through men as often as they change outfits — and honestly, goals.

The show’s fab four — Carrie, Miranda, Charlotte, and Samantha — practically have a new boyfriend every episode, especially in the early seasons before their great loves (aka Big, Steve, Harry, and Smith) come along. This means that relationships on SATC are often fleeting, ending before they even had a chance to start. And while sometimes the women get rejected, or they break up with their boyfriend citing legitimate concerns, sometimes the ladies dump men for truly petty reasons.

After a recent rewatch of the series, I was a little shook by some qualities in men that the women deemed as dealbreakers. Let’s go through some of the worst examples!

The 10 pettiest reasons men got dumped on Sex and the City:

1. For liking the wrong china pattern. 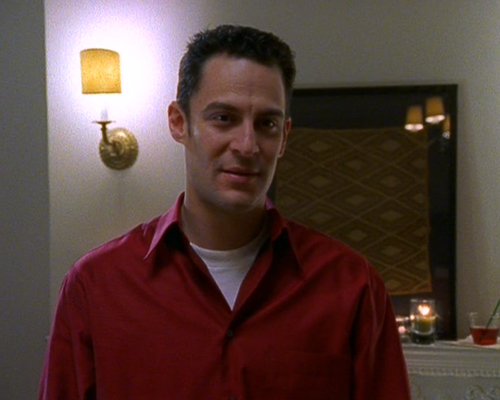 This simply must top the list because it is baffling. Carrie started out dating Sean, who she renamed “The Marrying Guy” because of how much he was driven by marriage and starting a family. He’s pretty bland, she’s not into him, telling him she was simply trying him on to “see if it fit”, and then dumped him. Savage but fair. Then things got weird when Charlotte was set up with Sean, as Carrie thought they would be a better match because Charlotte was looking to get married ASAP.

Their relationship got serious quickly, but then they went to a department store together and Charlotte noticed that Sean was drawn to an ugly china set. She dumped him immediately. “It would never work,” Carrie narrated. “He was American Classic; she was French Country.”

2. For going to the toilet with the door open. 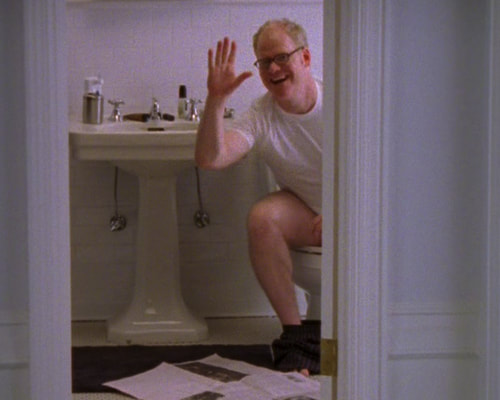 This is the first and only Miranda dumping on the list, because as it turns out: Miranda doesn’t break up with her boyfriends lightly: in fact, she is often stuck with some pretty despicable guys that deserve to be dumped long before she finally ends things.

But in this single instance, Miranda was dating Doug, who crossed her personality boundaries when he started using her toilet with the door open. She tried to embrace it at first, but he went too far when he took a dump while in full view of Miranda. Is it gross? Yes. Is it something worth having a conversation over, rather than (pardon the pun) dumping there and then? Also yes.

3. For saying their partner had wrinkles on their neck. In an episode where Samantha and Carrie both date men who are in their 20s, Samantha ends up dumping young chef, Jon, when he made a seemingly innocent comment. After sex, Jon told Samantha, “You know when you lay like that, you have the cutest little wrinkles in your neck,” which was enough to end their relationship.

“Samantha realised as long as she dated someone younger, she would always be older,” Carrie mused. This was annoying, as Jon did not deliver his comment with any malice and it was something that probably could have been cleared up with a conversation. It seemed random that Samantha — someone who possesses so much confidence — could be rocked by such a harmless observation.

4. For seeming gay but being straight.

Now we reach the stage of boyfriends getting dumped for straight-up problematic reasons. Charlotte thought she was going on a friend date with pastry chef, Stephan, who she assumed was gay. He ended up kissing her and they started dating, but she couldn’t accept that he was straight. This was despite the fact that Stephan was not gay, he told her this. He even said at one stage, “I’m a 35-year-old pastry chef who lives in Chelsea. If I were gay, I’d be gay.”

Yet, Charlotte couldn’t get past the fact he complimented her outfits and listened to Cher. Sounds like my dream man, tbh. Charlotte finally ended their relationship when Stephan was equally afraid of a mouse, as she was, citing that her “masculine side” wasn’t evolved enough for Stephan’s “feminine side”. That’s a nope from me, dawg.

In another problematic episode that has aged terribly, Carrie questions whether err… bisexuality exists, when she learns that her new boyfriend, Sean, has dated men and women in the past. She annoys him with ignorant questions, before freaking out at one of his friend’s parties when during a game of spin the bottle, she ends up “kissing” (if you could call Carrie not moving her lips “kissing”) Alanis Morissette. You could do a lot worse, Carrie!

This nothing event prompts Carrie to dump Sean by just leaving the party without saying goodbye. Umm, yikes. Sean was a 10/10, what TF were you thinking, Carrie?!

6. For having a small dick. Samantha’s first love from Season 1 has been largely forgotten, but she seriously dated James for several episodes — which was basically as serious as it got for Samantha before Richard and Smith. She didn’t sleep with him straight away, but when she did she realised he had an especially “tiny penis”. 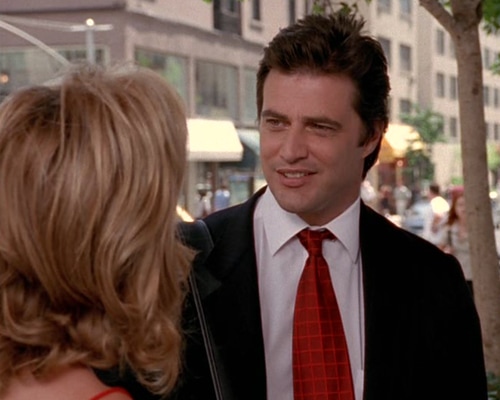 As Carrie so poetically put it, Samantha truly was Goldicocks. After dumping James for his small penis, she then met Mr. Cocky who happened to have a dick that was, by her standards, too large for her to handle. “You dated Mr. Big, I’m dating Mr. Too Big,” she told Carrie, after copping a look at his extra large package.

Samantha tried to have sex with him but couldn’t take his size. She swiftly told him they would be better as friends. Again, there are many other ways to get pleasure besides a penis entering a vagina. It’s out of character for Samantha to be so conventional about sex and most importantly, Mr. Cocky was hot!!

8. For having “funky tasting spunk”. 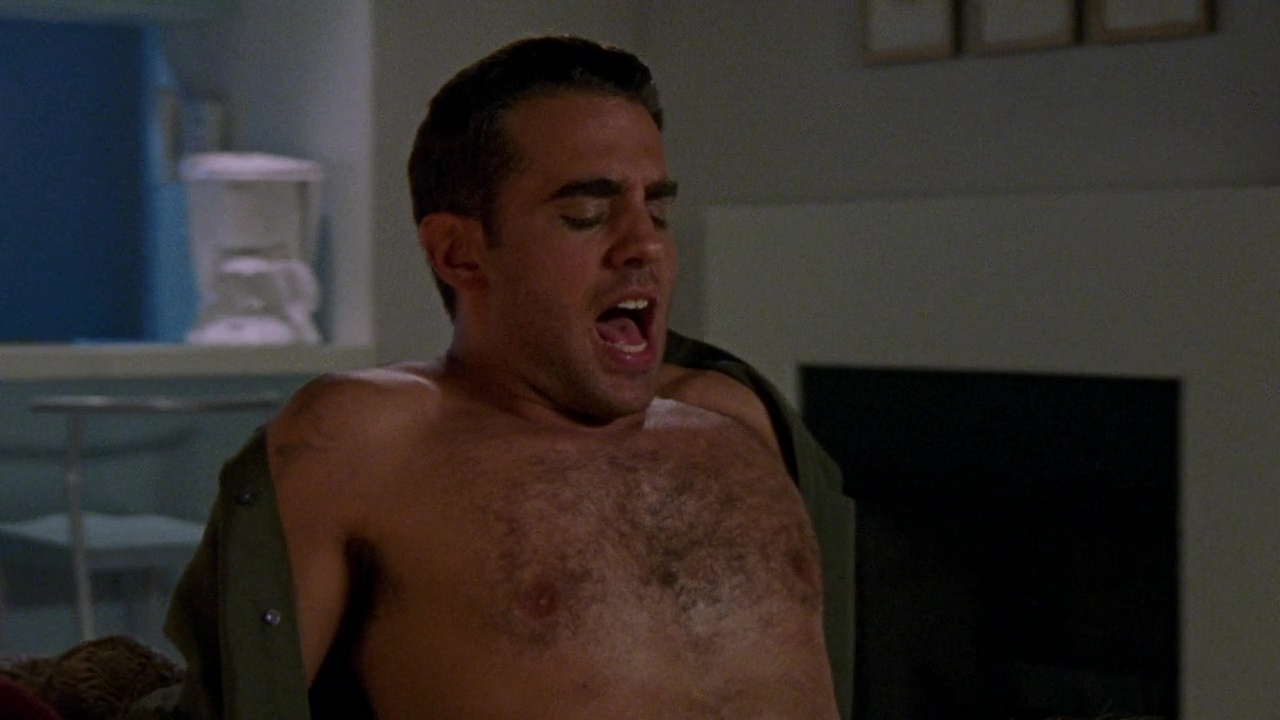 Possibly my favourite scene in SATC history was when Samantha told the girls over lunch, “I’m dating a guy with the funkiest tasting spunk,” triggering Charlotte to storm out of the restaurant. The whole storyline was hysterical, as Samantha started feeding Adam (aka spunky funk) wheatgrass shots to improve the taste. 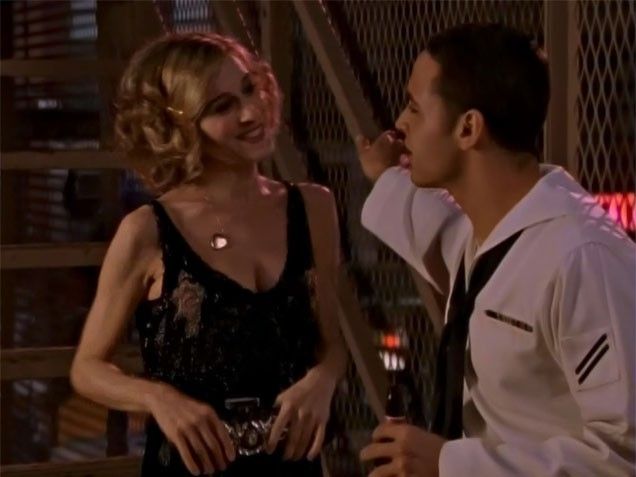 Carrie is well and truly back on her bullshit in the first episode of Season 5, which is a love letter to New York City in the wake of the September 11 terrorist attacks. Carrie spent the episode dating her city (err, OK), before trying to actually date a living, breathing human, in the form of sailor Louis. He was beyond cute and charming, but he badmouthed New York — telling Carrie quite correctly that the city is noisy and garbage lines the streets — and then suddenly she’s off him.

In response, she said, “It isn’t so bad,” before walking off mid-conversation. “I can’t have nobody talking shit about my boyfriend,” Carrie narrated at the end of the episode. I mean, sure! But also, NYC is far from a perfect city so maybe just chill TF out and bang this ridiculously hot man! Just an idea.

Every episode of Sex and the City can be streamed on Binge.