I’m here to tell you about an idea of the bad kind.

Here’s how it all came about. In a meeting, we were talking about the 20th anniversary of Sex and the City.

You know, that show that used to have reruns on and you’d switch the channel when your parents weren’t paying attention. And then when they’d come back in the room you’d flick it back to something that didn’t have sex scenes.

Anyway, after chatting about the show in my work meeting, I thought to myself, “haha maybe I should use Carrie quotes to talk to men!”

It was a funny idea. I sat on the lounge on Thursday night thrilled with myself. I even laughed out LOUD numerous times as I opened conversations with the most ridiculous quotes I could find.

I was the epitome of a sad single by multitasking using Tinder and watching Love Island. But I was a smug single. 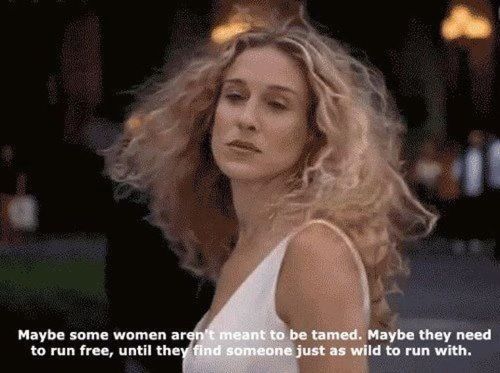 Let’s just say by the time the weekend rolled around, I was tired. I was old. I didn’t feel carefree like Carrie strolling down the streets of NYC, thinking about how Vogue is the only thing that feeds her (honestly, bitch what?).

I felt more like Miranda when she found out she was knocked up with Steve’s baby. Horrified and confused, but also knowing you’ve only got yourself to blame. Here were the basic rules of the game:

And without further ado, here were the results:

1. This guy wondered why girls put up photos with their male friends. OK, I may have slightly misquoted the line and should’ve said “running OVER them with a truck”. But same diff.

In the end, he didn’t reply. An overall success. Actually, now that I think about it, most men didn’t reply to the truck fantasy line. Strange.

2. This dude seemed fairly willing to match my demands. … except then it escalated. Aaaaand we have to cancel him.

4. Carrie once wondered why ‘it’s the woman who has to change and never the man’ so I asked this dude. He gave me some advice. 5. And others… well. Look, Carrie had some regretful quotes, OK? What did I discover during this process?

I learned I probably should now delete my account.

Thanks for joining me on this journey, friends. And sorry to all the potential ‘soulmates’ I may have lost along the way.