Ever wondered what kind of reputation the Australian film industry has overseas? Well, my recent conversation with an American friend sums it up pretty perfectly…

I asked him if he’d like to watch an Aussie flick, and he said: “Like, Thor and Wolverine movies?”

That might be a particularly depressing example. But the truth is that aside from a handful of international hits (hello, Muriel’s Wedding) Australian movies don’t really get exposure abroad. And it’s a shame, considering how many top films we’ve got to offer. I mean, imagine not knowing you’d missed out on a gem like Candy?

Living in New York, I think about the Aussie experience a lot, and often wonder if the films I grew up loving would land with a broader audience. Would non-Australians get the same kick out of hearing “get stuffed” on screen? Would they laugh at our crass humour? Or is our style a little too niche for most?

Because I have too much time on my hands, I decided to test this out.

I asked some friends to watch two films – Strictly Ballroom and The Castle – and got them to report back with their thoughts.

(Don’t @ me if you disagree with my selection. There were a lot of titles to choose from.)

My guinea pigs were: Georgie from England, Michaela and Chris from the States, and Maggie from NZ.

Here’s how it went: No-one understood why ballroom dancing was such a big deal.


Michaela (US): “Woah. They have stage mums [in ballroom] like they do in pageants?”
Maggie (NZ): “This isn’t a thing in New Zealand.”
Georgie (UK): “Omg I love the outfits! The makeup!”

Michaela: “I want Barry Fife dead in a dumpster. There are a lot of very close-frame shots that are taken from like, a little under the chin, which are terrifying me to my core.”
Georgie: “Barry is so shiny… so gross!”
Maggie: “I dunno. There’s something about Barry!”

Fran was a hit.

Michaela: (Upon seeing Fran for the first time) “I already know I love her.”
Maggie: “You can see she’s got a body-ody-ody under that shirt.”
Georgie: “I love how they take her glasses off, and it’s like, she’s pretty!”

Georgie: (At the beginning of the film) “The accents don’t seem super Australian…”
Georgie: (halfway through) “I rescind my statement on the accents not being strong. I kept thinking they were calling Les ‘Liz!’”
Michaela: “Did Shirley just say butt plug?!”

(In case you’re wondering, Shirley Hastings actually says: “You’ve been using that buff puff I gave you, haven’t you?”)

But I mean… what the hell is a “buff puff”, anyway?

Fran’s family got a lot of interest.

Maggie: “Is that where she lives? Under a bridge?!”
Michaela: “He [Fran’s dad] has a distinguished face like Sandy Cohen.”

Everyone thought it was extra, but dug it.

Michaela: “They’re all on drugs… Ooh! Look at the glitter bangs!” (Fringe, in Aussie-speak.)
Michaela on Ken: “Albino Elvis, over here. He’s number 69 because you can tell this guy fucks.”
Maggie: (when Scott wears the gold jacket) “This is iconic!”
Georgie: (during *the* slow clap) “Yaaaasss Doug!” 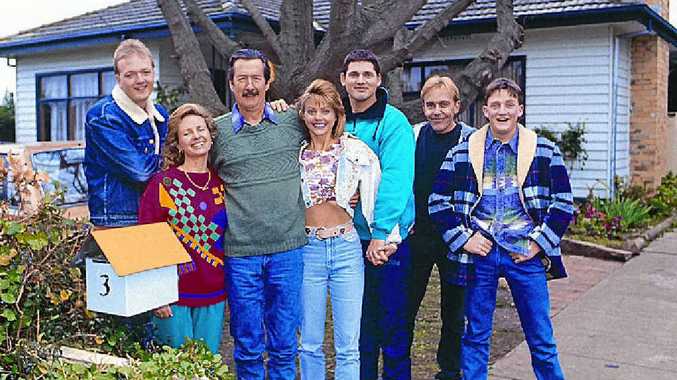 The accents and slang got a lot of attention.

Georgie: “Is the mum saying Darryl or darl’?”
Michaela: “I’m gonna use all of their sayings. Dreamin’!”
“Chewy? Is that chewing gum? I thought it was tobacco.”
“My [Aussie] accent is going to be amazing by the end of this.”

Everyone fell in love with the Kerrigan family.

Georgie: “The family is cute! Especially the dad – he’s so clueless!
Michaela: “Do I have the hots for this dad?”
Chris: “I love the mum, and this Russian guy.”

(Author’s note: By “this Russian guy” he means Lebanese Farouk – but hey, accents are tricky!)

Georgie: “Is there something going on with all the judges and fancy lawyers having British accents? The judge is a posh Brit!”
Michaela: “Look at them [the high court judges]. They look like Santa!”
Chris: “Do lawyers in Australia wear these wigs in real life? That’s so odd!”

(When Darryl asks Farouk, “what is it with wogs and cash?!”)

Michaela: “I wanna know what that is, because I’m scared to say it…”
Chris: “Are ‘wongs’ Russians?”

I sent them a Superwog skit for more info.

Georgie: “I just really enjoyed that when describing a fancy night, they said, ‘went to the carvery’.”
Michaela: “Is everyone eating raw hot dogs? I don’t understand. They’re eating chodey, raw hot dogs!”

Mini frankfurts mustn’t be a thing in the States.

So, what did I discover?

Well… endearing bogans are objectively loveable and everyone loves an OTT Aussie accent. And while there are references (and party snacks) that people outside Aus aren’t familiar with, the ~vibe~ of the films comes across just fine.

So, get your foreign mates into some Aussie cinema, folks; there’s a whole world of ripper content out there waiting for them.